How to Set Pre-Notched Castings

It's easier than you think! A pre-notched setting means that the notch that the girdle of the stone rests in has already been made for you, so all you have to do is set the stone by bending the prongs over so that they hold the stone securely. There are several types of gem setting pliers available. My personal choice is a pair of chain nose pliers, which can also be used for a variety of other tasks.

Rings and some of the larger solitaire pendants are a good place to begin as the prongs are a bit heavier than with some of the smaller settings.

Place your stone in the setting and be sure that the stone is level. This is VERY important. Hold the setting up to eye level and turn it so that you're sure that it's level all the way around. Stone should fit snugly into the setting, but you shouldn't have to force it. You may have to gently open the prongs a bit first so that the stone slips in easily.

I like to snug the prongs up against the stone first (with all shapes/sizes) before I start bending the prongs down over the stone. To do this, you have to hold your chain nose pliers up and down and place each jaw of the pliers on opposite prongs and gently exert a little bit of pressure to snug the prong up against the stone. With a 3 prong trillion, there is no opposite prong, so one of the jaws is against a prong and the other jaw is up against the middle of the stone itself. You have to be careful not to damage the stone. There is a product called Tool Magic that you can dip the jaws into that will coat the jaws with a rubber coating so as not to damage stones or even mar the metal of your casting. There are other brands as well, but this is the one that I’ve used. It’s not permanent and the process will have to be repeated every so often.
Once you're sure the stone is sitting flat and level, HOLD it in position with your thumb, using a slight downward pressure so it does not move when you begin to set.
Just have the tip of your pliers over the prong, with the pliers at a 45 degree angle to the stone. Be sure the pliers are pointed to the middle of the stone and gently squeeze the pliers. Be sure not to use too much pressure, and make sure you hold that stone in position! 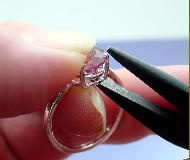